The Most Feared Man in Britain

All of the tracks for Dave’s forthcoming Album and Single were laid down at the Creative Technologies studios in Harrold, under the eye of Dave’s very good friend Rob Ferguson.

So now you know and now there’s no excuse. Go out and order them in advance from your nearest purveyor of musical discs. Having already heard the tracks that will be on the single and a couple of the album tracks, I can promise you they are well worth it. 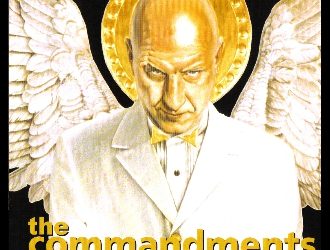 Dave Courtney descended on our studio for the first time in early November last. Dave and Rob Ferguson, of Creative Technologies have known each other a number of years, having originally been introduced to each other through a mutual friend, Reg Kray. Rob was also Executive Producer for Reg’s ‘Thoughts’ CD, recorded just days before his untimely demise.

Although Dave called from the motorway to pre-warn us of his arrival, nothing could prepare us for the whirlwind that arrived later that evening. We knew enough of Dave to expect the unexpected, so we all told our respective other halves they’d see us when they saw us, and set to work. Nominally in charge of the studio were Darren Flynn and Jamie Gibbons, both accomplished musicians and producers. The grand concept was to produce a Gangsta Rap single, but a la Dave Courtney, obviously. 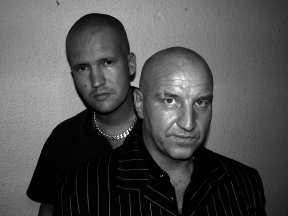 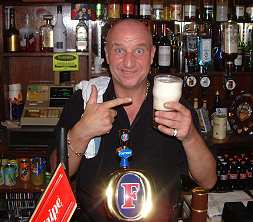 The evening started with all the usual hellos, and as we all got to know each other it became obvious that DC’s work ethic differed somewhat from those of our usual studio guests. We showed him round the studio, and in return he showed us some of the travelling survival kit he’d brought with him. We’re not talking nail scissors and disposable toothbrush either. As DC regaled us with tales and one liners, the studio gradually filled with blue grey cigar smoke and the aroma of fine cognac. The atmosphere seemed to be conducive to the creative muse, so we tentatively steered the conversation towards what we were about to produce. We had a vocal backing track for a couple of choruses we had laid down in preparation, and as the studio added music to the heady mix, we looked forward with anticipation to the evening ahead. Spontaneous as ever, DC’s gruff tones cut through our reverie.

‘Shall we all fuck off down the pub? It’s nearly closing time.’

‘Dave, you’re in the twilight zone now, we don’t really do closing time round here,’ chipped in Flynn, our resident mad Dubliner, who’d arrived in the village to co write a song with Jamie some seven months previously, and never gone home.

‘Shall we go anyway?’

So go we did. Down to one of the three local pubs, the one run by Annie, ex school mistress, ex in professional terms only. You can take the teacher out of the school, etc. etc. However, we know her pretty well and I’m sure she loves us in her own way. In we bowl, in DC’s slipstream naturally. Within half an hour, we’re not only settled, but Dave has been promoted to honorary landlord for the evening. 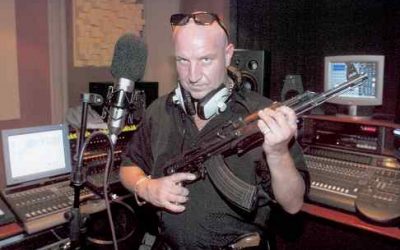 Stood behind the jump, dishing out pints and pearls of wisdom in equal measure, he looks born to it. There were a few confused locals popped in that night, it’s not every day of the week you find Dave Courtney behind your local bar. But such is Dave’s natural charm and assurance, the majority of his clientele greeted him with ‘Hello Dave, pint of Guinness please’ or similar, as if it was the most natural thing in the world. Our remarkably elastic local licensing hours were enjoyed to the full by the whole company as DC held court from both sides of the bar.

As all thoughts of a productive evening slipped from our minds, Dave, as ever, had other ideas. ‘Right then, are we doing this track or what?’ So there we were, wee small hours of the morning, all with a comfortable glow on, heading back to the studio through the chill November night. ‘Fucking pleasant, this’ remarked DC on the way back to work, as we wandered erratically past the round, stone built village gaol on the green. So in we went, back out came the cigars and cognac, and on went the music and the mic.

And here’s the thing, Dave stood in front of that microphone stand, with the backing vocals and rhythm track pouring out of the studio monitors, for the next four hours. As his gravelly, laconic delivery filled the room, we knew we were on to a winner. Growling out barbed one liners in one breath, and intense political comment in the next, there was no stopping the effortless flow of words. Incongruous as it may sound to those who don’t know him, Dave’s highly developed sense of justice came to the fore as the night progressed, and he warmed to his subject. He really did mesmerise us that night in the studio, and the power of his convictions, spoken in that understated way of his, contrasted perfectly with the sweetness of the female backing vocals.

Eventually, DC stepped back from the mic. ‘Fuck me, you’ve got enough for an album there,’ he announced gleefully. And so, as the world around us started to wake up, we all sipped gratefully on strong coffee, and Dave prepared himself for departure and other commitments. How does he do it?

So, for the next few weeks, Jamie and Flynn spent their evenings in the studio, listening to DC’s pearls of wisdom, and composing the music not just for the single, but for an entire album. Soon enough it was time for a return visit from Dave, so he could listen to the album in full, and record whatever changes were necessary. 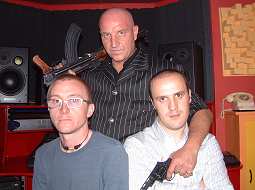 This time, we were a little more prepared for Dave’s unorthodox approach to studiocraft. Also, having spent some considerable time listening to the results of the first session, we knew we could take things further with DC. He arrived with Jen, and a mountain of a man, to whom we can only refer to as Dark Horse, more of which later. With the musical content more or less finalised, Dave was inspired to not only re-record most of his vocals from the previous session, but to bring Jen in to record more backing vocals. His next suggestion was that he felt some of the tracks might benefit from some additional vocals. ‘What we need is one of them black rappers, giving it some,’ suggests Dave, nonchalantly.

We all agreed in principle, and silently wondered where we would find such a talent in the small hours of a Thursday morning, miles from the nearest seething metropolis.

No problem, says we, and adjusted the mic stand to its very highest setting. Well, Dark Horse is a mate of Dave’s as we said, and proved himself to be a highly talented rap artist too, as you’ll hear if you buy the single. So talented, we later found out, that he is signed as a recording artist to a major record label, and forbidden by contract to record for anyone else, so Dark Horse he stays. Thanks Dave.

Well, to cut a long story short, despite another extended visit to the local, where Dave & Jen were greeted like long lost and very thirsty friends, we got enough material that night to allow us to finish the album, giving Jamie several week’s work in the studio. As this is being written, we are still finalising a couple of tracks. However, we now have a release date for both album and single, and it’s hard to believe that all that hard work could be so enjoyable.